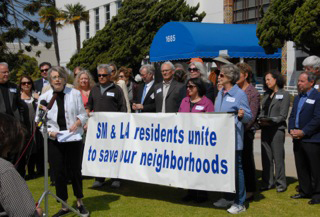 Over 45 community leaders from Santa Monica and the Westside held a press conference yesterday to criticize the draft environmental impact report (DEIR) for the huge Hines/Bergamot project at 26th and Olympic. The massive mega-office project, proposed without an area plan for the surrounding 140-acre area, is a throw back to the bad city planning of the 1980s. Its traffic impacts are "not mitigatable" according to the DEIR.

This project, and the other six projects proposed in the area, would generate over 24,000 new daily car trips in an already gridlocked area. As a region, the City of Los Angeles and 17 neighborhood associations in LA and SM joined ranks to form an alliance to oppose this project and any other large projects in the Bergamot area until a regional plan and a comprehensive environmental review is done. In addition, over 350 emails have been sent to the City by residents objecting to the environmental impacts disclosed in the DEIR and asking the City to engage in a regional planning process to keep our neighborhoods bearable.

"Santa Monica already has over 8,000,000 square feet of regional office space-- we can't afford to build 15% more of office space in this gridlocked part of the Westside" said Diana Gordon, SMCLC's co-chair. "We demand good regional planning to reduce this project's size and impacts. Having a cumulative regional plan is the only way we can protect our neighborhoods and quality of life."

Click here to read LA Department of Transportation (DOT) letter approved by the LA City Council and sent to the City of Santa Monica, demanding substantive changes to the project and emphasizing the need for the City of LA to be involved in the decision making process.

Links to items in the local press regarding the press conference and the SM/LA coalition against the project: 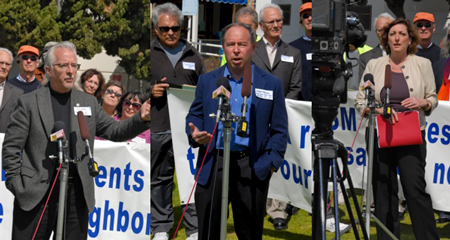 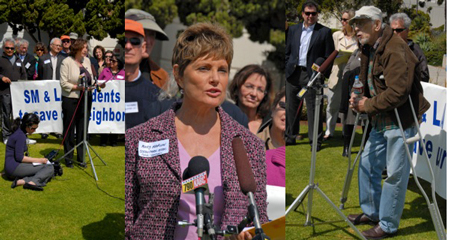